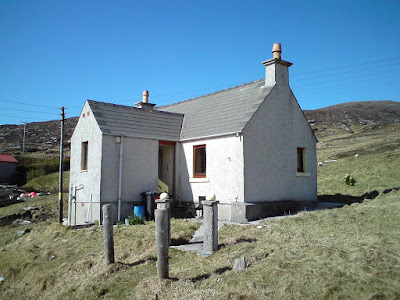 A lovely detached one bedroom holiday cottage, perfect for couples, conveniently located in Bentangaval/Nask, near Castlebay, in the south of the Isle of Barra in the Western Isles of Scotland.

The house consists of a double bedroom, bathroom, two hallway areas, and a lounge area with through kitchen.

The house is freshly furnished and decorated. The kitchen has an electric cooker, fridge-freezer and washing machine. The lounge has a large three-seater sofa. There's a 32” HD TV + Blu-ray/DVD player and Hi-Fi.

Have a look at the year planner. Remember the start of any existing booking shown will be an afternoon or evening arrival, so you will be able to stay and depart ahead of them that same morning.

Available start and end dates are thus of course subject to the established pattern of any pre-existing bookings.

Please try to avoid asking for dates that scupper others ability to book a full week. 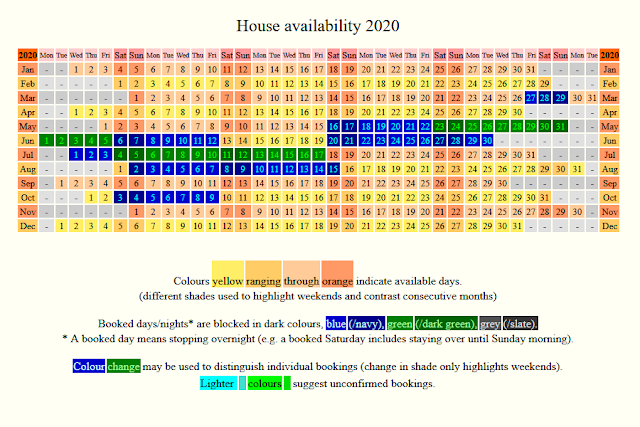 A deposit of £50 is required to secure your booking, with the balance due four weeks before the start of your holiday.

During the winter ferry timetable (which usually runs from early October to the end of March), off-season bookings can be made to suit different travel times. Shorter stay off-season rates for two persons then calculated as £24 x number of nights + £70. Thus, for example, five nights would be (24 x 5) + 70 = £190.

Prices quoted above are based on one or two people staying. The lounge has a large three-seater sofa which can comfortably sleep one person.
For weeks in summertime add £70 for a third person staying.
For off-season shorter stay rates, use £32 rather than £24 in calculations for three people. Thus, for example, five nights for three persons off-season would be (32 x 5) + 70 = £230.

Simply send an email to the address suggested in image below (ie. the house name as one word @gmail.com).

The house isn't suitable for families with children. Sorry, no smoking and no pets in the house please.

The electric meter will be charged up on your arrival with enough electricity for your stay.

4G EE mobile network coverage is available from the house and most of the island.

There is plenty of room for roadside parking on the opposite side of the road to the house.

Clean linen and towels will be provided, including all bedding, with spare duvets and extra blankets in the house if you need them.

There is a washing machine in the house if you want to use it for your own items during your stay. 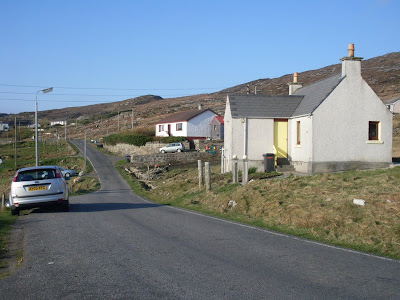 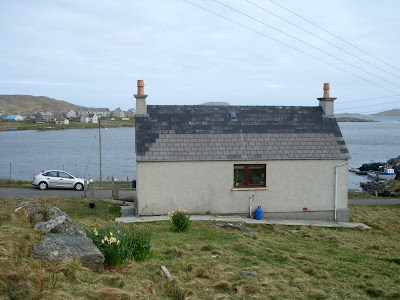 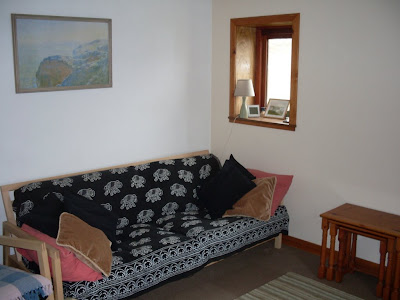 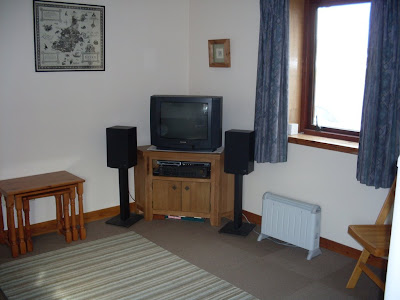 Take the main road round the island via the west side out of Castlebay, ie. turn left off the slip road up from the pier.

There are some traffic calming measures around the school, apart from which the road is otherwise fairly wide and straight. From here you can see the house on the other side of a small bay directly in front. The road bends to the right, goes over a small bridge near the bay and straightens out.

Take the turning left to Nask (Nasg). Up, over a cattle grid, the road then dips, the house is just before the bottom of this dip.

Look for two houses quite close to each other but on opposite sides of the road. You want the one on the right, a house with a grey slate roof and a front porch with a yellow door.

It's best to park on the opposite side of the road to the house.


Taigh Tangaval's position is indicated in the Google Map embedded above. You can also see the house via Google's Street View.

The image below is via Streetmap. You can try this direct link if you'd like to zoom and pan around Barra on an Ordnance Survey style map. 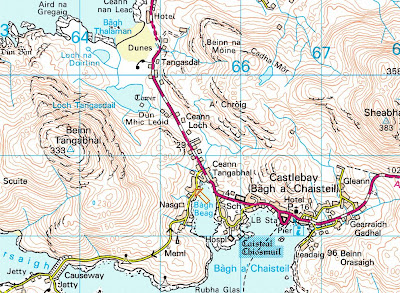 A postcode search on HS9 5XN should get you a fairly close result in most other mapping websites, or coordinates 56.957, -7.506 even better.

For some further fun, if you want to see a model of my house then it's in Google's "3D warehouse", where I've described it as - 'Taigh Tangaval' holiday house at 11B Bentangaval, Isle of Barra. If you have Google Earth then you might be interested to know that the model has been geographically positioned, and included in its 3D Buildings layer, so you have the option of zooming in and flying around to see the house and where it sits on the beautiful isle of Barra.

Barra is about 65 miles from Oban (i.e. the mainland) off the west coast of Scotland. It is linked to a smaller island, Vatersay, via a causeway. These are the most southerly inhabited islands of the Outer Hebrides.

Barra has an area of about 35 square miles. There is a circular road around the island of about 14 miles (the A888). There is a branch road from Northbay which takes you to the cockle-strand/airfield.

The beaches on Barra are magnificent. From the cottage, it is about a mile walk to Tangusdale which has a lovely beach and a hotel. Further along the west coast you will go past Allasdale beach, Seal Bay, where you can watch the seals on the rocks (they often will swim towards the shore to check you out), and past the golf course, to Greian Head, a great headland to see cormorants, shags and various gulls.

From the house, if you follow the Nask road over the hill, you can get to Vatersay via the causeway.

The centre of Barra is hilly, Heaval being the highest point at 1,260 feet.

Barra's geology consists of Lewisian gneiss (metamorphosed granite), the oldest rocks in Britain and some of the oldest in the world (some 2,800 million years old).

Barra is known as the "Garden of the Hebrides" because of the variety of wild flowers.

How to get to Barra

The ferry from Oban to Castlebay takes just under 5 hours. Costs ~£30 return per passenger. If you want to take your car, it'll cost about £140 on top of your passenger fare. Contact Caledonian MacBrayne for more details such as timetables and prices.

You can also make your way to Barra from other islands via ferries from Uist /Eriskay, or take a flight from the mainland arriving at Barra's beach airport.

Most of the island's shops are in or around Castlebay. In the 'main' street there's a store which sells groceries, newspapers and petrol (the fuel pumps are on the opposite side of the road). There's also a Post Office, Royal Bank of Scotland, Tourist Information, hardware shop and a wee cafe.

On the way into Castlebay from the house, you will go past the local school that has a swimming pool and a games hall. There is also a library with Internet facilities. Check locally for times when facilities are available. The main Co-op supermarket is also in this vicinity (in Horve).

Craigard Hotel and Castlebay Hotel serve meals.
Also, in the 'high street', there is the Kismul Cafe.
The local pubs include the Castlebay and Craigard bars.

Away from Castlebay on the west side near Tangusdale beach is the Isle of Barra hotel. On the north east side of the island, in Northbay is the Heathbank Hotel.

Kismul castle - This is situated in Castlebay harbour. There are frequent boat trips out, especially in the summer. Check with the tourist board or locals.

Mingulay - This is a long boat trip, views of the cliffs around the uninhabited island of Mingulay are incredible. Again you need to check with the tourist office or locals.*

It is nice just to walk anywhere on Barra.